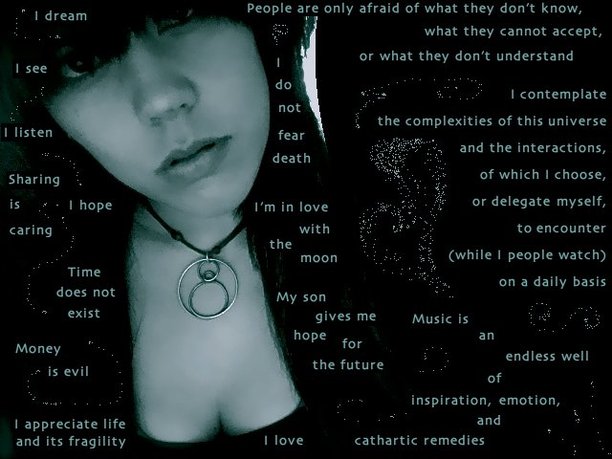 Meraki: Doing something with soul, creativity, and love.

What's in a name? That which we call a rose
By any other name would smell as sweet.
- Shakespeare's Romeo and Juliet

What started as an identity crises, sprouted to be a personal social experiment, and has now bloomed into a startling truth of oneself, one's interactions with others, and the reflections we see through those we cherish.

When we come into this world we have a gender and we are (usually) given a name. Trivial. Yet, so significant.

How do I disturb the norm? I do not introduce myself as having a name. When asked where I come from, I say, "The stars." Who is to say I'm wrong? Each reaction I received (whether positive or negative) caused my curiosity to explode. I became much more committed to introducing myself as nameless- most especially in situations where I thought it may be terribly awkward.

The more I was committed, the more I began to see patterns (and, for now, I have categorized them):

Creatively Dead: Many instantly wrote me off as crazy, immature, too strange, a loon, etc. These people, in general, tended to be the Type-A personalities, square, and concerned-with-their-outer-image-and-appearance type people. They did not want to engage in a real conversation- they're always on a schedule, out of time, etc. These people would not give me a name because they did not want to or were to afraid to interact with me.

The Boxers: Ranging from every level of interest there were people who would simply play along or find the concept interesting; so, they would give me a name of someone I made them think of, someone they knew that I looked like, or simply, "You look you could be a _______ ," giving me another typical female name or sometimes even just a capital letter. They "boxed" me in by my appearance.

The Thinkers: Generally these people have more patience and would come up with a symbolic name, an image, or a word from another language that held meaning. They took time to observe, look me in the eye, and sometimes would not answer right away.

Time Keepers: After careful observation, the initial response was that they needed to get to know me first before they bestowed a name upon me. Some have (and are) taking months to develop a name for me.

On a basic psychological standpoint I realized that the way in which others would name me correlated to the way in which their brains processed information and how their thought patterns functioned- more or less their desire for creativity and spontaneity could be indirectly measured. Noticing the different patterns in people also made choosing the individuals with whom I share my energy and time with much more selective.

The Time Keepers have been and are the reason why I continue this tabula rasa like approach to my name. Through this name adaptation I have had incredible personal growth and stronger connections with others and the Earth. As I open a door inviting them to interact and connect with me- their doors are opening and reflecting up against me. In other words, the names which are given to me become an outward reflection of what my community, friends, and family have given me.

I am now extending this challenge to those who know me by my birth name.